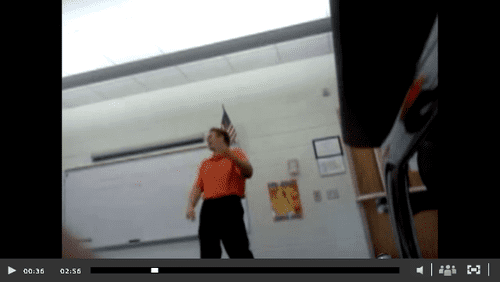 Not all bullies are students.

Check out this vid, AFTER THE JUMP, in which an apparently psychotic teacher berates a student for three consecutive minutes on camera. "What're you gonna do, dude?" the teacher wonders, after the student asks the teacher to refrain from calling him "special."

… except, possibly, get you fired. The teacher plainly had no idea that the object of his derision was surreptitiously recording his performance with a camera phone, which the student secreted, initially, under his chair. For now, the teacher's on paid admministrative leave while the doyens of New Jersey education analyze the footage, in which the teacher refers to the student as a "tard," and informs him that "nobody gives a f**K" about him in the "real world." What, if any, consequences the teacher will face should be announced some time in the coming weeks.