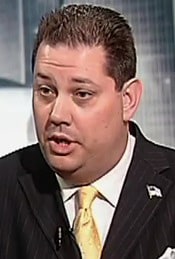 The NY Daily News wrote, of the lawsuit, in July:

The group, led by the Rev. Jason J. McGuire (pictured), claims that the state Senate, in adopting the legislation, violated the state’s Open Meetings Law by closing off the Senate galleries and lobby; and by holding closed door meetings with Mayor Bloomberg and others who backed the law.

The group also claims, among other things, that Gov. Cuomo and the Senate ignored the constitutionally mandated three-day waiting period before a bill can be acted upon and that lawmakers approved the legislation in exchange for campaign contributions from Bloomberg and other high profile "Wall Street financiers."

The four-page decision includes some tough language for the way things get done at the Capitol, including what the judge labels as “disingenuous” justifications from Gov. Andrew Cuomo for issuing a message of necessity that rushed the legislation onto the Senate floor on the final evening of session. In the case of same-sex marriage, the message stated that speed was required as long as 50,000 New Yorkers were being denied their right to marry — a set of circumstances that had pertained for the previous 200-odd years without prompting emergency action.

However, Wiggins "concludes the decision by shooting down all of the lawsuit’s complaints" and letting the Attorney General off the hook as a defendant: "Wiggins notes that since the court must assume the underlying facts in the suit’s case to be true, the matter is therefore 'a justiciable issue' to be determined in court."

Wiggins also notes in his ruling that the measure is not one in which the Court should be involved:

this Court is reluctantly obliged to rule that that the message of necessity submitted by the Governor was accepted by vote of the Senate, and is NOT within this Court’s province to nullify.”

Full ruling, AFTER THE JUMP…