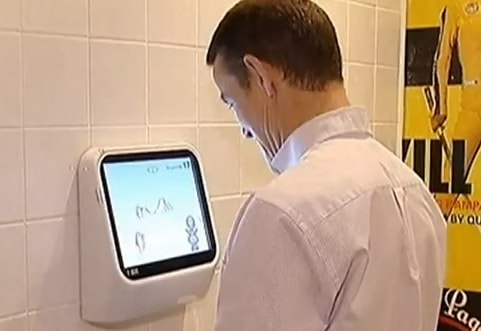 The first urinal video game has been installed in The Exhibit, a bar in South London, Digital Trends reports:

Developed by UK-based Captive Media, the high-tech urinals come with 12-inch LCD screens fitted just above them. Ads play on the screens until a punter approaches the urinal. Detecting that the punter is in position and ready to pee, the system then switches into gaming mode. “Sophisticated algorithms then allow the user to do something simple, but VERY engaging – controlling the system just by aiming their stream left or right!” the blurb says on Captive Media’s website. So with the skiing game, you’re able to navigate the course with some subtle but deft movements. How well you do at the game is entirely in your hands, so to speak.

MacSween said that when the system was trialed at a bar in Cambridge recently, a couple of behavioral changes among the peeing public were noted. “There has been less mess, which we sort of expected because we designed the game so you’re not splashing about, and less vandalism,” he explained.

“When we put it in, people thought it’d be ripped off the wall within a week, but it’s still there after four months. Because people are having a laugh, there’s a lot less vandalism. People just tend to get less angry.”

Watch an ITN report on the new games, AFTER THE JUMP…