Manuel Rodriguez, Jr.: My Opponent Might Be Gay, So Vote For Me - Towleroad Gay News 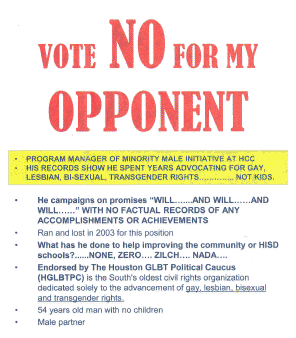 Take a good look at the above. That's a slice of a campaign advertisement from Houston Independent School District trustee Manuel Rodriguez, Jr., who's running for his job against Ramiro Fonseca — a man who, who knows, could be gay. And Manuel Rodriguez, Jr., who knows, could be a small-minded cur whose permnent abode is the moral low road; who exhibits contempt for certain kinds of families in his district, and who deserves to be whipped out of office by the first semi-competent mammal with half an urge to run against him. Hard to tell! Political ads can be so misleading!