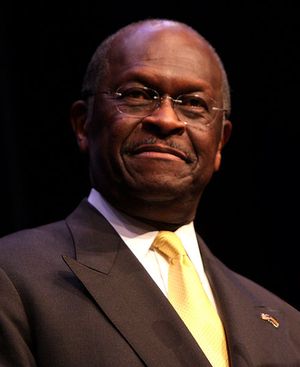 Slate's Dahlia Lithwick has a hilarious article up on the new nature of sexual harrassment denialism, which depends less on defending the accused ("So-and-so didn't sexually harass anybody because So-and-so is a good and honorable person!") than on imagining the offense out of existence ("So-and-so couldn't have sexually harassed anybody, because the whole concept of sexual harassment is the invention of a conspiracy of humorless biddies out to castrate successful men and take their money!") The article's all about the legion of Herman Cain defenders who've sprung up in the three weeks since we first caught wind of his alleged history of harassment. Below, find the remarkable collection of quotes Lithwick has compiled to illustrate her point. They paint a pretty bleak picture of the right's stance on gender relations in this allegedly enlightened anno Domini, 2011.

John Derbyshire, National Review: "Is there anyone who thinks sexual harassment is a real thing? Is there anyone who doesn’t know it's all a lawyers' ramp, like 'racial discrimination'? You pay a girl a compliment nowadays, she runs off and gets lawyered up."

Laura Ingraham, The Laura Ingraham Show: "We have seen this movie before and we know how it ends. It always ends up being an employee who can’t perform or who under-performs and is looking for a little green."

Kurt Schlichter, New York Post: " … the only things you need to file a lawsuit are the filing fee and a printer. Facts are optional. … Where sexual-harassment law once protected women from being forced to be the playthings of crude lechers, it’s been transformed to enforcing a prim puritanism that drains the humor and humanity from the workplace."

Sen. Rand Paul, quoted at Politico: "There are people now who hesitate to tell a joke to a woman in the workplace, any kind of joke, because it could be interpreted incorrectly."

Rep. Steve King, quoted at Slate: "It's a terrible concept to define an action by the perception of the perceived victim."

Ex-Sen. Fred Thompson, National Review: "These alleged victims and their lawyers — no matter what they may say publicly — are champing at the bit to come forward for their day in the limelight and the inevitable book deal."

Incredible, isn't it? Apart from the plain inhumanity of accusing strangers of dastardly selfishness, sans evidence, because they happen to accuse a beloved public figure of something nasty, the right's wagon-rallying around Herman Cain reveals an extraordinary lack of logical rigor. Taken to its conclusion, it imagines out of existence any misbehavior by anyone, so long as that someone is someone they like. There's no whistle-blowing that couldn't, in theory, be ascribed to some selfish motive or misunderstanding. For example: You could say that Fred Thompson doesn't really think Cain's accusers are selfish money-grubbers; that he's only claiming so because he wants to enhance his profile by commenting loudly on a hot-button issue. But you shouldn't. Because there's just not enough evidence either way.