Brandon tells the story of how he met and married Luke, a South African, and decided to step forward as a public face against the Defense of Marriage Act, at Stop the Deportations: 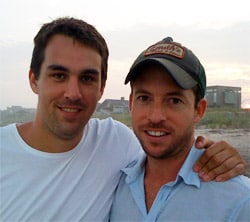 I will fight for my right to sponsor my husband for a “green card,” a privilege heterosexual Americans take for granted. With President Obama’s recent decision not to defend DOMA and signals from the Department of Homeland Security about protecting LGBT families from being torn apart by deportation, we believe that this is the time to challenge our exclusion from the family-based immigration system that otherwise works reasonably well to keep opposite-sex binational couples together.

We start here today by arguing our case in the court of public opinion. Recently, we joined Stop The Deportations – The DOMA Project, and I filed a petition for Luke as my spouse. We know that puts us in a potentially perilous position: unlike an opposite-sex couple my petition will face the insurmountable hurdle of DOMA and unlike all other spouses in our situation, Luke could face deportation if we are not ultimately successful.  We do not want to be forced into exile and we cannot imagine life apart. This means we might have no option but to fight this in the courts and in Congress like so many thousands of gay binational couples who have raised the profile of this inhumane and cruel discrimination.  Whatever the short-term challenges, we will not allow ourselves to be torn apart by my government.