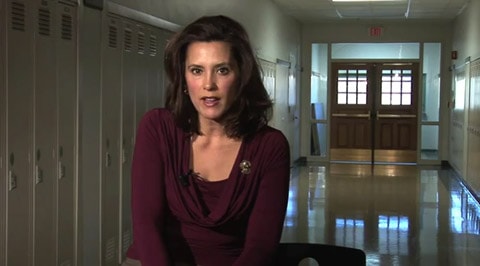 After outcry last week over language in Michigan's anti-bullying law which in effect, okayed bullying if a student, parent, teacher, or school employee could come up with a religious or moral reason for doing it, state Senator Gretchen Whitmer, whose comments against the bill were seen widely in a viral video on YouTube, says it looks likely the language will change, MLive reports:

State Sen. Gretchen Whitmer (D-East Lansing) today said that language in state anti-bullying bill that would permit harassment for religious reasons would be changed before the bill becomes law, and she is hopeful that after meeting with Republican lawmakers that it will happen soon.

"It looks like they are poised to do that," Whitmer told WJR's Paul W. Smith on Tuesday morning, an election day across the state. "I'm glad to say that there are people on both sides of the aisle that believe that we should not legitimize excuses for tormenting a student in school."

This week, Whitmer recorded another video in which Michigan children speak out against the language, and Whitmer reads letters she has received from bullied kids.