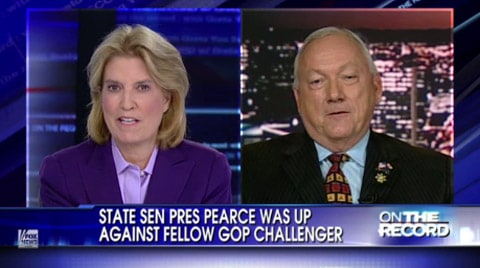 Van Susteren asked Pearce whether he and Lewis are friends. He responded by launching into a tirade about recall elections, boy scouts, and homosexuals.

Via Kenneth Walsh, who writes:

I'm told by a reader in Mesa that his successor, Jerry Lewis, "is truly one of the nicest guys you would ever meet. Always smiling, upbeat, not a bad word ever spoken. A teacher/businessman. He's a Republican but Dems, independents, moderate Republicans and thinking-Mormons got behind him. What a coalition! The Pearce folks threw everything at him including a padlock to the crotch from a car when he was jogging. Lots of mud they even accused him from stealing used clothing off the backs of homeless kids. What a bunch of assholes."