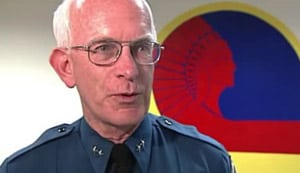 “This shows that no one is above the law, particularly a current or a former peace officer,” Robinson said.
Robinson said Sullivan had an ongoing relationship with the man as well as other men he had a history of bonding out of jails in the metro region.

Sullivan is being held on $250,000 bail in the jail that bears his name, the Patrick J. Sullivan Jr. Detention Facility. He was sheriff from 1984 until his retirement in 2002.

Watcha report from 9News, AFTER THE JUMP…

If the clip is not available, try here, or this other report from FOX 31.