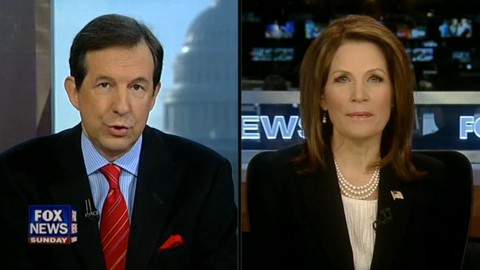 On FOX News Sunday yesterday, Chris Wallace showed Michele Bachmann the clip in which she was confronted over same-sex marriage by a Waverly, Iowa student.

Asked Wallace: "Same-sex marriage is legal in Iowa, so does that mean it's all right?"

"No, I don't believe that it is. Marriage, historically, for all human history has been between a man and a woman. It hasn't been the same-sex marriage. And remember that in Iowa, it was judges that made the decision, not the legislature, which are the people's representatives, and certainly not the people. That's why the people of Iowa threw out three of those Supreme Court judges. That's something that should give pause to all judges. The people of Iowa are sick and tired of having judges tell them what their laws are. They're not a super-legislature. They're judges. And they need to act like judges. As President of the United States I will only appoint judges that will apply the strict construction or the original intent of the Constitution of the United States."