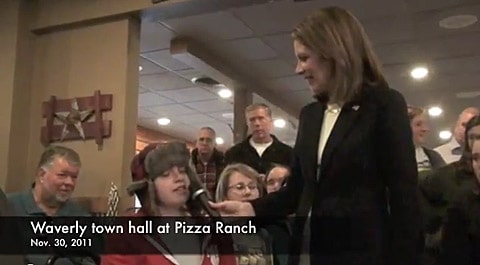 Bachmann responds that gays can marry, they just need to marry the opposite sex!

Another student then asks Bachmann how she would stop Muslims from being ostracized for their faith if she's pushing Christian prayer in public schools.

Here's part of the transcript (via the Des Moines Register)

JANE SCHMIDT: Then, why can’t same-sex couples get married?

JANE SCHMIDT: Why can’t a man marry a man?

BACHMANN: Because that’s not the law of the land.

JANE SCHMIDT: So heterosexual couples have a privilege.

BACHMANN: No, they have the same opportunity under the law. There is no right to same-sex marriage.

JANE SCHMIDT: So you won’t support the LGBT community?