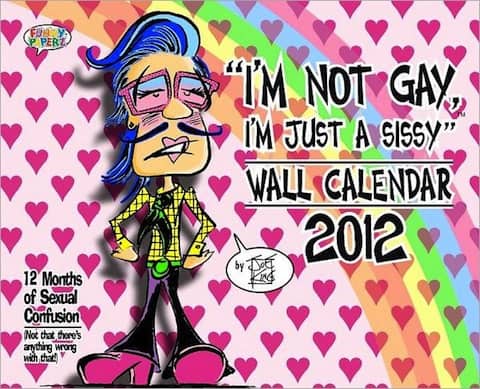 Two days ago, Andy broke the story of Christian cartoonist "Joe King's" bizarre "I'm Not Gay, I'm Just a Sissy" calendar, which was for sale at Amazon and BarnesandNoble.com. The calendar, which promised "12 Months of Sexual Confusion, Not That There's Anything Wrong With That," proposed to make buyers laugh by making fun of straight-identified men with "sissy" characteristics. Or so it seems. The whole exercise was a bit of a muddle, frankly — the February illustration was entitled "We've All Got AIDS," and an illustration purporting to make fun of sissy Oscar night parties was used to illustrate November.

Now, after complaints from a great number of Towleroad readers and countless others, Barnes & Noble has ceased selling the thing. Amazon.com is still at it.