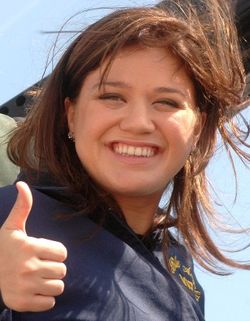 Pop star Kelly Clarkson, who is in most respects an average gal with an average gal's indifference to the news, took to Twitter this morning to express her love for Ron Paul:

I love Ron Paul … I liked him a lot during the last republican nomination and no one gave him a chance. If he wins the nomination for the Republican party in 2012 he's got my vote. Too bad he probably won't.

The Pauline Army was quick to embrace Ms. Clarkson. But as the singer examined her Twitterfeed, she began to learn disturbing things. Subsequently, she Tweeted:

I have never heard that he’s a racist? I definitely don’t agree with racism, that’s ignorant.

And, upon encountering a rumor that Dr. Paul is a homphobe:

I love all people and could care less if you like men or women. I have never seen or heard Ron Paul say anything against gay people?

I read Clarkson's double misuse of the question mark as a sign of shell-shockedness. It's never fun to learn you've accidentally aligned yourself with a (possible) homophobic racist isolationist survivalist kookypants. Sometimes, it must suck to be famous.