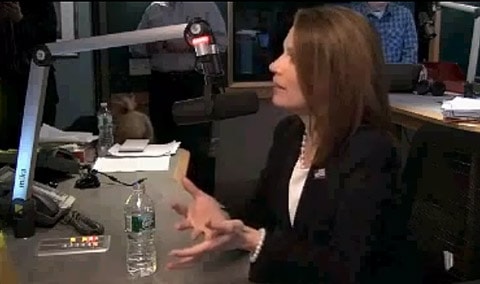 Glenn Beck asks Michele Bachmann about the "activist Elijah" incident in which an eight-year-old boy was prompted by his mother to tell her, "My mom is gay and she doesn't need any fixing".

Says Beck: "They're coming with children to attack you on this…this is the nuclear bomb in politics…accusing you of [being a] homophobe or whatever – they''ll do this to anybody they want to destroy…Are you a homophobe?"

Replies Bachmann: "Well, of course not. I believe that we love all people. And I do. I love everyone."

She then goes on to tell Beck she doesn't believe that gays should be able to marry or have civil unions, but repeats her assertion that they are able to marry someone of the opposite sex.