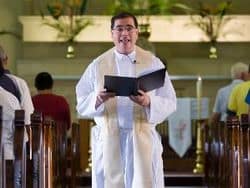 Paul Kelly is a Catholic priest in Queensland, Australia. Though he hasn't made his views on the subject known, it's safe to assume that he doesn't believe in marriage equality. (If he does, he's not a very good priest.) But he's a defender of LGBT people anyway.

In July, 2008, a man was murdered on the grounds of Fr. Kelly's church in Maryborough. Once apprehended, the attacker defended his actions by citing "gay panic" — that is, by claiming he committed murder because he was driven to panic by his victim's homosexual advances. Apparently, this defense is a viable one according to Queensland law, and by using it the murderer hoped to have his crime downgraded to manslaughter. It didn't work. Still, Fr. Kelly was aghast.

Kelly stated that “It’s extremely upsetting and worrying, I was following the trial with great interest and then there was this talk that he (the victim) had made some sort of homosexual advance. I never heard of something so terrible, that there is some kind of defense that says if you make a homosexual advance then that can be used in court. I just can’t believe in this day and age that can be any kind of defense to hurting someone.”

The Brisbane Times noted that “Father Kelly has now launched an online petition to lobby the state government to have the law changed. The petition was launched last week and after enough signatures are garnered Father Kelly plans to take it to the Premier and LNP leader Campbell Newman.”

… Father Kelly told the newspaper that “By mentioning (homosexuality) might be a factor, it seems to increase the tolerance that violence has been used. I find that pretty astounding.” He also hopes that no one will find it odd that a Catholic priest was campaigning to change this law saying “The church has always defended basic human rights, it’s never said intolerance or violence should be tolerated. It’s a powerful mix of paranoia and intolerance that means people can get their charge downgraded to manslaughter if there was a homosexual advance. It’s not about gay rights, it’s about human rights.”

Good on Fr. Kelly. It would be a much better world if more clerics paid more than lip service to the notion that the sanctity of LGBT life trumps religious objections to LGBT lifestyles.