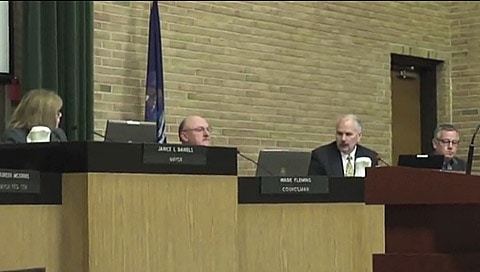 Troy, Michigan Mayor Janice Daniels, whose recently-uncovered Facebook status update from June declaring "I think I am going to throw away my I Love New York carrying bag now that queers can get married there" has put her in national headlines, faced a row of furious City Council members and four hours of public debate from residents angry over her words, Patch reports.

80 people lined up to speak, and Daniels was urged to quit, but she hasn't, the Detroit Free Press reports. 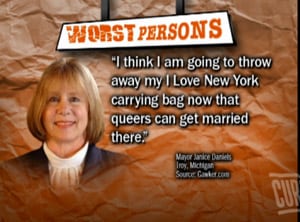 Said Councilman Jim Campbell: "You were wrong, and you know you were wrong. You embarrassed the city. We've lost business in the city in the last few days because of your statements. We've got the whole country laughing at us."

Check out a video of Daniels being admonished by Council Members, AFTER THE JUMP…

Patch reports on the many residents who showed up to speak:

Especially eloquent were several Troy High School students who spoke early in the meeting. "This isn't an issue about sexuality … this is about being human," said Troy High senior Skye Curtis, co-founder of the school's Gay-Straight Alliance.

"The part of this ordeal that is the most morally repugnant to me is the lack of thought that Mayor Daniels put into this … Daniels' casual use of an outdated slur has had the greatest possible impact on the most innocent members of her constituency, Troy's youth. We are too young to vote but we are not too young to be impacted by your words."…

"Mayor Daniels – and especially the Troy City Council – the limelight is on you," said Denise Brogan-Kator, executive director of Equality Michigan. "This is your moment; make the best of it. You can do better, and the people of Troy deserve better."

"We came here tonight because we wanted Mayor Daniels to have a really good look at – and to meet for maybe the first time in her entire life – a gay family," Birmingham resident Amy Weber said. Amy and her wife, Tina, spoke directly to Daniels during public comment, and the couple's two young daughters brought drawings to give to the mayor.

Check out a video of Daniels being admonished by Council Members and Olbermann's clip, AFTER THE JUMP…