Activist group AllOut delivered almost 250,000 signatures to the High Representative of the European Union for Foreign Affairs Catherine Ashton today, urging Russia to back down on proposed legislation that would ban any gay rights protests or marches and in its language compares homosexuality to pedophilia. Ashton promised to address the issue with PM Vladimir Putin. 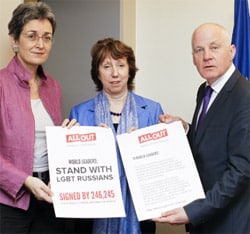 Today, the High Representative of the European Union for Foreign Affairs Catherine Ashton, the Presidents of the European Parliament’s Intergroup on LGBT rights Michael Cashman and Ulrike Lunacek received more than 246,245 AllOut.org signatures from around the world urging them to support the human rights of lesbian, gay, bisexual, and transgender (LGBT) people in Russia.

Catherine Ashton assured to European Parliament Members that she would raise the issue directly with Russian Prime Minister Vladimir Putin.

Michael Cashman and Ulrike Lunacek both declared in a release from Strasbourg, “We warmly welcome Catherine Ashton’s assurance that she will raise the issue directly with the Russian Prime Minister. The issue of equal rights for LGBT people and freedom of expression (as well as fair elections) is very dear to all Europeans – and Russians are Europeans too.”

“This is a great victory, because hundreds of thousands around the world joined AllOut.org to raise their voices.  Russian activists have been heard at the highest level of international community.”  Andre Banks, co-founder of AllOut.org said, “But we need to continue the fight, and stay mobilized with our friends in Russia until this homophobic bill is repealed.”

The Russian bill, currently pending in St. PEtersburg and Moscow, is now being pushed at the federal level by Russia's Deputy Prime Minister Dmitry Kozak.