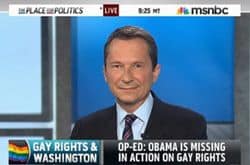 During the Clinton years, gay marriage was a relatively new issue and most Americans did not yet understand it. No one could be “gay-married” anywhere. When the Republican-led Congress presented Clinton with the Defense of Marriage Act a few short months before the 1996 election, I and members of the White House staff struggled in vain to come up with ways the President could veto it and stay consistent with what was then his stated opposition to the granting of marriage rights. (Clinton has since changed his mind.)

But now, the remarkable new reality for Obama in this election is that supporting marriage equality is smart politics.

Predicting this new reality along with DOMA will force Obama's hand before the election:

Many of the lawyers who follow these cases closely—and as one who served as an adviser to President Clinton on gay rights, I include myself in that category—believe that the odds favor marriage advocates. If so, these twin rulings from influential courts will have a substantial impact. The Supreme Court would likely hear final appeals by 2013.

The potential for those decisions, together with a rapid change in public opinion in favor of marriage equality, have clearly become factors in President Obama’s thinking. As a result, I believe that he will announce his support for same-sex marriage before the 2012 election.