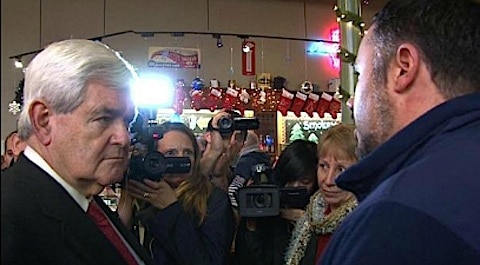 This morning I posted an item from the Des Moines Register about Scott Arnold, a gay Iowan who told the paper that Newt Gingrich suggested he vote for Obama after asking the candidate how he planned to engage gay Americans.

Turns out Gingrich's answer was a bit more complex than that. Said Newt to Arnold:

Gingrich went on to tell Arnold that if marriage is the biggest issue for the gay voter then they should vote for Obama.

Think Progress LGBT notes that gay conservative groups GOProud and Log Cabin are upset about the "liberal press" and its characterization of Gingrich's remarks:

GOPROUD: The liberal press is at it again, attempting to mischaracterize the words of a Republican Presidential candidate. Speaker Gingrich said absolutely nothing wrong in his exchange with the gay Iowa voter… Speaker Gingrich handled himself with class and dignity in this discussion with the gay voter and the press reports that have reported otherwise have done a real disservice to the truth.

LOG CABIN REPUBLICANS: In this political climate, the door is wide open for a strong Republican candidate to win the support of conservatives, independents and disillusioned Democrats – and there are those who are working hard to paint any and all Republicans as bigoted in a fear-mongering effort to shore up the president’s base. That is unfair and highly unfortunate for our community.

By rushing to defend his positions on “job creation, national security and a better future,” these groups are admitting that the dignity of LGBT people is not their primary concern. If it were, they might have made at least one reference to Gingrich’s numerous anti-gay positions, proposals, and statements that should more than justify concern from all voters, conservative or otherwise.

Watch the full exchange between Gingrich and Arnold, AFTER THE JUMP…