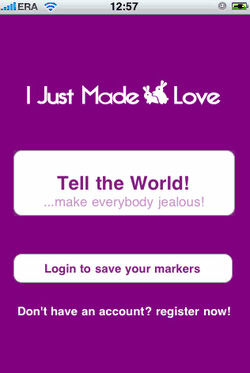 Did you just make love? Do you want to tell the world about it? There's an app for that!

The Android – and now iPhone – app lets you record where, when and even in what position you 'made love' – and then upload it to an online database – with your comments.

The Android app has already been downloaded 10,000 times.

The I Just Made Love site claims to have recorded 193,000 'acts of love' … Most of the posts via the site so far seem to be in Polish – with only isolated instances of lovemaking in other countries.