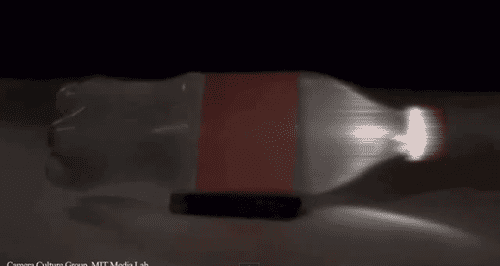 Camera technology can now keep pace with the speed limit of the universe: Pseudo-photographic technology now exists which shoots quickly enough to chart the course of a burst of light. See the video AFTER THE JUMP …

Would Putin lose a fair election?

How Lost ruined TV, and paved the way for Homeland and American Horror Story:

The empty thrills, the ticking clock that never runs down, the pointless twists and turns that are neither motivated nor resolved, all degrade the audience’s palate until all we can taste is blood, all we can see is teenagers in hot pants, all we can hear is flat dialogue and all we can expect at the end of season is a giant, flashing question mark.

At Funny Or Die, the CEO of Lowe's comments on the recent flap over the store's pulling of its advertisements from All American Muslim. (If you missed that particular controversy, click here for context.)

This is juvenile, stupid, and very NTSFW. But the unexpected denouement made me giggle.

Please, no — let's not say Bradley Manning leaked those files because he's gay.

"I'm fed up with elitist judges" who seek to impose their "radically un-American" views, Gingrich said Saturday in a conference call with reporters.

In recent weeks, the Republican presidential contender has been telling conservative audiences he is determined to expose the myth of "judicial supremacy" and restrain judges to a more limited role in American government. "The courts have become grotesquely dictatorial and far too powerful," he said in Thursday's Iowa debate.

As a historian, Gingrich said he knows President Thomas Jefferson abolished some judgeships, and President Abraham Lincoln made clear he did not accept the Dred Scott decision denying that former slaves could be citizens.

Relying on those precedents, Gingrich said that if he were in the White House, he would not feel compelled to always follow the Supreme Court's decisions on constitutional questions. As an example, he cited the court's 5-4 decision in 2008 that prisoners held by the U.S. at Guantanamo Bay, Cuba, had a right to challenge their detention before a judge.

I loved him, but it'd be a mistake to cannonize Hitchens:

"If the great effort to remake Iraq as a demilitarized federal and secular democracy should fail or be defeated," [Hitchens wrote], "I shall lose sleep for the rest of my life in reproaching myself for doing too little. But at least I shall have the comfort of not having offered, so far as I can recall, any word or deed that contributed to a defeat." The rest of Hitchens' life turned out to be unjustly circumscribed. But his demilitarized federal and secular democracy is a mirage. More likely a future Iranian client state and Shi'ite stronghold awaits. Those words would not wear well on his headstone.

On the other hand, let's, just a little.