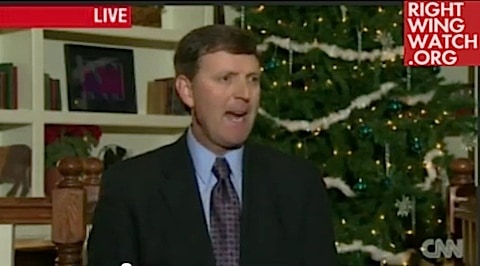 Bob Vander Plaats, who has sought to put his imprint on the Republican presidential race for months, announced Tuesday that he would support Mr. Santorum. Mr. Vander Plaats and other evangelical Christians have talked openly about their struggle to unite behind one candidate, but he urged others to follow his lead.

At this late stage in the campaign, it remains an open question how the endorsement will affect the Iowa caucus campaign. Mr. Vander Plaats’s political activity, including leading the effort to remove three judges from the Iowa Supreme Court last year in a battle over same-sex marriage, has made him a lightening rod in some Republican circles.

Vander Plaats' group, The Family Leader, will not be giving an endorsement:

The Family Leader said Tuesday that it would remain neutral in the race, a decision that was reached after several lengthy meetings with members of the board, according to Republicans familiar with the discussions. But in the end, participants said, Mr. Vander Plaats decided to make a personal endorsement.

Chuck Hurley of the Iowa Family Policy Center also endorsed Santorum. Speaking as an individual and not on behalf of his organization, Vander Plaats lauded Santorum as the “Huckabee in this race” and a “champion of the family.” Echoing Huckabee, who frequently reminded Religious Right voters, “I come from you,” Vander Plaats concluded, “I believe Rick Santorum comes from us, he’s not to us, he comes from us, he’s one of us.”

Watch Vander Plaats give his endorsement, AFTER THE JUMP…