Nightlife.ca asks Jamie Bell, who voices Tintin in the forthcoming Steven Spielberg adaptation, whether he thinks Tintin is gay: 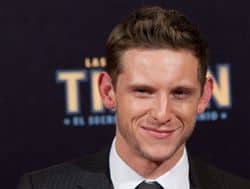 “I mean, I think that there’s always been that conversation; there’s always been that argument. No one has ever said no to that argument; there’s nothing definitive, so I mean, it’s up in the air. It’s an interesting question, because there is a lack of women and females in the entire Tintin universe; there’s only one and she’s represented as this annoying person who is singing all the time and bugs everyone [Ed’s Note: La Castafiore]. So there’s more mythology and curiosity about that. In all fairness, marriage and relationships aren’t really on his radar, though; he’s got bigger fish to fry and a larger treasure to find.”

It's certainly something that has been discussed, however.

If you missed the full Tintin trailer, it's HERE.

Previous Post: « Chris Barron to Step Down as Chair of GOProud
Next Post: The Spielberg Face: VIDEO »