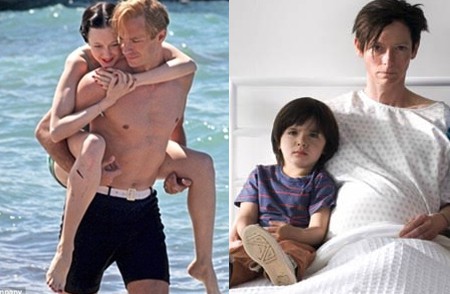 W.E. (Madonna's movie) and We Need To Talk About Kevin (with Tilda Swinton)

NOW "QUALIFYING"
Another deluge of Oscar hopeful hits screens this weekend including Madonna's royal romance W.E., the Tilda Swinton births a demon child drama WE NEED TO TALK ABOUT KEVIN, and the Polish holocaust drama IN DARKNESS. You're forgiven if you don't even notice that they've opened. Perhaps we should call this a light drizzle rather than a deluge. All three of those films, which each have viable if very particular Oscar hopes, have opted for the dread "one week qualifier" route. For those who are unfamiliar with the boring facts known as "rules" it works like so: a film must open within the calendar year for a one week regular theatrical engagement in order to be eligible for that year's Oscars.

Unfortunately the studios have long since perfected this sneaky back road to awardage. Why risk those pesky deterrents to glory like, oh, flopping at the box office or allowing the film to percolate with audiences — what if they don't like it!? — when you can quality, remove your film immediately from theaters, sit back and wait for magic nominations to materialize. If a film is not nominated, it falls dramatically down the priority scale of its distributor sometimes never to be seen again. If a film wins the lottery is nominated, it opens trusting that its shiny new nominations make it a hot piece. This is rather a gross perversion of the spirit of the law, which aims to honor the best films of a given year, if not the letter. But Oscar doesn't seem to mind as they've never fixed what amounts to a loophole. So this year, Tilda and company, Madonna & company, and the Polish film (among others) are trying this tactic. Basically they're not opening until 2012 but they're pretending they're 2011 releases. Boo!

OPENING FOR REAL
THE SITTER (starring Jonah Hill) and NEW YEAR'S EVE (starring everyone else) will be everywhere you look in wide release. In limited release with Best Actor and Best Actress buzz are Gary Oldman headlining a rich ensemble in the espionage drama TINKER TAILOR SOLDIER SPY and Charlize Theron playing a YOUNG ADULT novelist who heads back to her sleepy hometown to steal her high school beau (Patrick Wilson) back from his wife.

Do you bristle when you hear gay slurs in movies or is it all about the context? I'm curious to see how my fellow LGBT moviegoers react to one plot thread in YOUNG ADULT. I loved this inspired dark comedy, but one of its plot points (minor spoiler though it actually takes place before the movie) involves a high school hate crime in which a presumably gay student was left crippled. 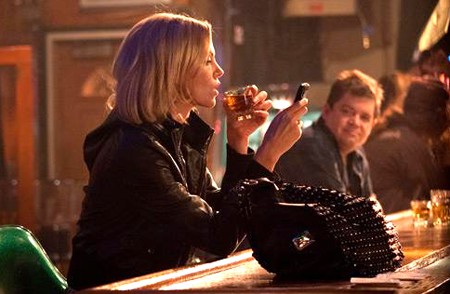 Patrick Wilson's "Buddy" argues with Charlize Theron's "Mavis" about the incident and points out that she called the victim a 'theater fag' all the time in high school. "It's an expression," she says with eye rolling exasperation, eager to get back to flirting. She's so entirely self-absorbed that the feelings of others are mysteries and she definitely can't process her own complicity in the bullying. She's a Mean Girl as anti-heroine of her own movie; all grown up but still achingly adolescent inside.

Young Adult star and comic Patton Oswalt (a real threat for a Best Supporting Actor nomination), has issues of his own with the gay stereotypes in movies. Splitsider, in survey of roles he DIDN'T take or didn't get thus far, reminds us about a bit on his comedy album wherein he talks about turning down a gay best friend part.

I got offered to go audition for a romantic comedy and they wanted me to audition for the part of the 'gay best friend!' It’s 2011—I may as well put on blackface and tap dance. That's how old that cliché is now. I read the script and every scene was like, I walk in and she’s crying and I go, 'Microwave popcorn and red wine, stat!' 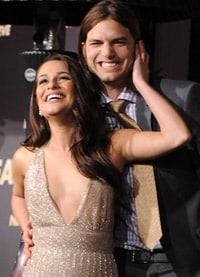 In honor of W.E.'s sorta release, Madonna's best moments on the big screen.

With the release of New Year's Eve – she shares her scenes with Ashton Kutcher — I've been thinking about Lea Michele a lot. What will her career hold for her after Glee. How do you follow up a showstopper like "Rachel Berry"? There's very juicy gossip circulating about unhappiness on the set of Glee and ratings are down so the time is ripe for her next career move anyway. Are you still watching? Will you watch Lea Michele after Glee? She's so divisive. She's still supposedly in the running for "Eponine" in the long awaited film version of Les Miserables.

Oh Les Miz… even hearing the title, the songs start playing at full volume in my head.