UK tabloid Daily Mail is reporting on a new biography of Richard Nixon by journalist Don Fulsom which suggests former President Richard Nixon had a drinking problem, beat his wife, and had deep ties to the Mafia and a long-term affair with Cuban-American businessman Bebe Rebozo: 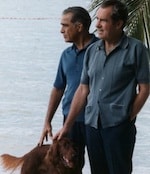 Yet the most extraordinary claim is that the homophobic Nixon may have been gay himself. If true, it would provide a fascinating insight into the motivation and behaviour of a notoriously secretive politician.

Fulsom argues that Nixon may have had an affair with his best friend and confidant, a Mafia‑connected Florida wheeler-dealer named Charles 'Bebe' Rebozo who was even more crooked than Nixon.

The book, Nixon's Darkest Secrets, is out next month — by coincidence at the same time as the UK release of a new film directed by Clint Eastwood about another supposed closet gay among Washington's 20th-century hard men.

Did Nixon have a gay affair with a Mafia fixer? [daily mail]