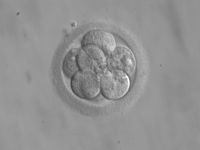 In Brevard County, FL, a mother's parenting rights have been restored in appeals court after a previous ruling decreed she had none, according to The Orlando Sentinel.

The woman, a police officer, was in a committed same-sex relationship for more than 11 years. Her partner was infertile; she was not. When the couple decided to have a baby, this woman donated one of her eggs, which was implanted in her partner's womb and brought to term. When the couple split last year, a Brevard County court ruled that the partner who gave birth to the child should have sole parenting rights, though he said the decision "broke his heart." But the law was the law; the partner who donated her egg had no legal standing.

Not so, apparently. Last week, writes the Sentinel:

… a state appeals court in Daytona Beach overturned [the] decision, saying the other mother has parental rights, too.

The 5th District Court of Appeal ruled that the U.S. and Florida constitutions trump Florida law and give parenting rights to both women. State law, it added, has not kept up with the times.

"This is a unique case, and the appellate courts in Florida have never before considered a case quite like it," it said.