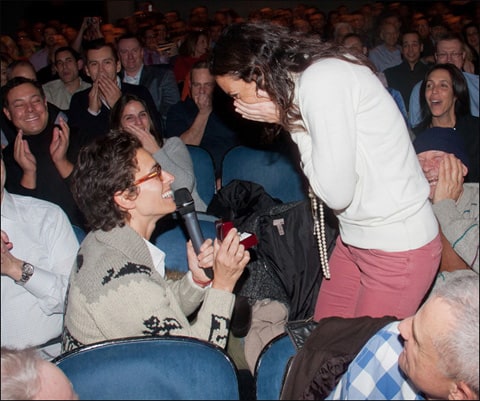 Peter James Zielinski captured this photo at the Minetta Lane Theatre this week at the end of a performance of Standing on Ceremony: The Gay Marriage Plays, which closes on December 18.

Playbill writes: "Jenny Greenstein received a special encore surprise when she attended the Dec. 9 performance of Standing on Ceremony. Following curtain call, her partner Dina Weisberger got down on one knee and proposed in front of the cast and packed crowd at the Minetta Lane Theatre. Greenstein said yes."

Previous Post: « Now This is the Way to Play Hockey: VIDEO
Next Post: Australian Finance Minister Penny Wong and Partner Have Baby »