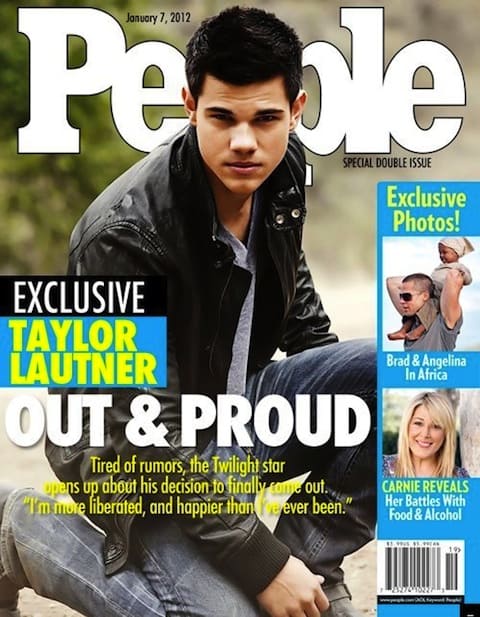 A mock-up of a forthcoming People magazine cover on which Twilight star Taylor Lautner announces he's "Out & Proud" is a fake, a People rep tells Gossip Cop:

A rep for the magazine confirms to Gossip Cop exclusively that it’s “absolutely fake.”

The fraudulent issue, which reads, "Tired of rumors, the Twilight star opens up about his decision to finaly come out. 'I'm more liberated, and happier than I've ever been'", borrows its Brad Pitt/Carnie Wilson sidebar from a May 2006 People cover, according to GS.

The cover fooled many, however, including hip-hop mogul Russell Simmons:

Producer Russell Simmons was fooled by the the fake, tweeting, "proud of Taylor Lautner for his bravery and his courage." He later responded to being duped, saying, " Disappointed that people would joke about someone coming out about their sexuality. Let Taylor Lautner be whoever he wants to be…"