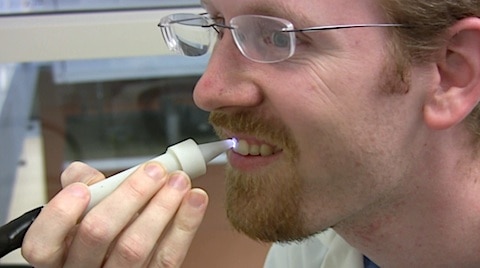 Human clinical trials are underway on the "plasma brush" a device that should revolutionize the dental industry with painless cavity filling:

“There have been no side effects reported during the lab trials, and we expect the human trials to help us improve the prototype,” said Qingsong Yu, associate professor of mechanical and aerospace engineering of MU, and Meng Chen, chief scientist from Nanova, Inc., which holds a co-patent for the plasma brush with MU.

For those of you who cringe at even the sound of a dentist's drill, this should be good news.

Previous Post: « Newt Gingrich and His Third Wife Have a Saccharine Holiday Greeting for You: VIDEO
Next Post: Siri, the Holiday Horror Story: VIDEO »