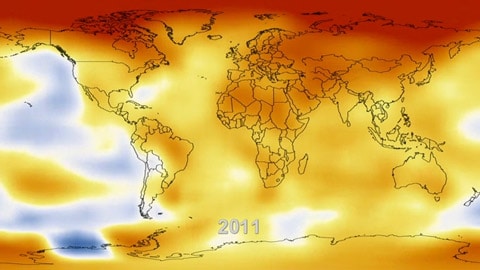 A new video from NASA's Goddard Institute for Space Studies maps Earth's temperatures over the past 130 years:

The global average surface temperature in 2011 was the ninth warmest since 1880.The finding sustains a trend that has seen the 21st century experience nine of the 10 warmest years in the modern meteorological record. NASA's Goddard Institute for Space Studies (GISS) in New York released an analysis of how temperatures around the globe in 2011 compared to the average global temperature from the mid-20th century. The comparison shows how Earth continues to experience higher temperatures than several decades ago. The average temperature around the globe in 2011 was 0.92 degrees F (0.51 C) higher than the mid-20th century baseline.

2011 is the ninth warmest year on record.