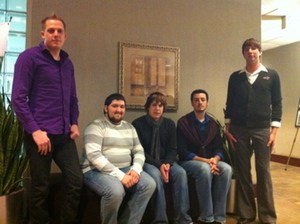 “I come from a farming family, so it’s conservative or Catholic,” said a 21-year old, Bryan Pulda. “Our personal views are more reflected in the Republican candidates.”

Ryan Schrader also traced his political leanings to his family, saying, “I come from a very conservative background myself. My family is very conservative Baptists.” Like Pulda and so many other Iowa voters, Schrader’s faith also influences his political preference. In this case, Ron Paul. “His views are more towards letting the people, which would be all of us, make the decisions to shape our country.”

Another gay Paul supporter, 21-year old Dereck Plagmann, pointed to the candidate’s calls for strict constitutional originalism, “I think it’s something that we’ve definitely drifted away from.”

“We need to get back to it basically,” he said. “Other presidents, everybody’s trying to make changes to it. They’ve lost focus on what really made this country, and what made us who we are.”

Mitt Romney is also getting some love in Iowa. CJ Peterson, 21, tells Johnson he’s impressed by Romney’s emotional evolution since his last campaign in 2008. “If you compare the YouTube videos from ’08 to now, he seems a lot less robotic and choppy and nervous,” he explained. “I think he seems a lot more relaxed, and almost presidential, ready to be a leader.”

So, why would openly gay men support candidates like Romney and Paul, neither of whom have stellar records when it comes to equality? Pulda says he supports the GOP, yet no specific candidate yet, because he has worries other than inclusion. “I would find it almost selfish for me to go out and say, ‘I vote for this person simply because they want same-sex marriage,’” he explained. “There are so many more problems in this country affecting more people than just me.”

I guess that’s fair enough, but then one has to ask themselves whether the Republicans have all the answers on corporate regulation, global warming or other issues as important for the nation’s future. Clearly these men think they do, and many other LGBT people probably do, too. But isn’t voting for someone based on their religion just the same?

It is worth noting, however, that none of these men showed support for the most anti-gay candidates, including Rick Santorum, Rick Perry or Michele Bachmann, so clearly there is some LGBT interest afoot.

In other gay election news, Google interviewed Johnson to get his perspective on Iowa, the race as a whole and where the GOP stands on LGBT equality. Check it out, AFTER THE JUMP…