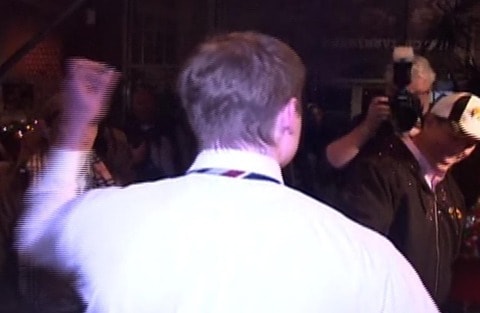 Yuck. Ick. Ug. Rick Santorum was asked by Iowa radio host Jan Mickelson today about being glitter-bombed at an Iowa event last week. And employing the condescension social conservatives dispense so well, Santorum replied, “I feel sorry for that man that he felt like he was compelled he had to do that.”

It’s one of those things where there are a lot of people out there who are hurting, who are struggling with a lot of different issues. My feeling is, that’s part when you open yourself up to the public, you’re going to get good things happen to you and not so nice things. What I’m taking the approach of is you move on. I feel sorry for that man that he felt like he was compelled he had to do that. Like I do, what I’m supposed to do, is you know, according to our faith, is to pray for them, and I hope people work that out.

Hmmmm, it’s almost as if Santorum’s “that” correlates with being gay, rather than the protest in question.

Santorum’s host, Mickelson, went on to try to turn the tables on “the gay lobby” for frothily hijacking Santorum’s Google search. It was “satanic,” he said.

I’m not encouraging people to do this, but if you ever want to see hate, just enter Rick Santorum’s name on the Internet and just see what the gay lobby has tried to do to Rick Santorum. If there ever was an example of seething, satanic, wicked hatred directed toward a decent person, it’s that. And when I saw that guy do that to you, I just wish I had been there.

“Decent person?” Wait, I thought we were talking about Rick Santorum.

I’ve included video of the blink-and-you-miss-it glitter-bombing AFTER THE JUMP. The Santorum supporters’ responses call their character into question, as well.