Jake Burris, who manages Democrat Ken Aden's bid for Arkansas' 3rd Congressional District, arrived home to find the family cat dead and "liberal" written across its body in magic marker. I'm not going to include the photo but it's here if you're interested in making yourself sick. 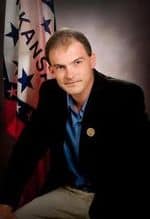 Aden is running against incumbent Republican Representative Steve Womack. Burris was returning to his Russellville, Arkansas home with his four children when he found the cat on his doorstep, the Aden campaign said in a press release on Monday. The mixed-breed Siamese cat had one side of its head bashed in to "the point the cat's eyeball was barely hanging from its socket," the release said.

I asked Aden for a comment on the record: “This is sickening.  To kill a child’s pet…I’m at a loss for words…I’ve seen the best and the worst of humanity, but this is something else.”

Both Ken and Jake though made it clear that they weren’t going to back down on the campaign trail, both agreeing that caving to this kind of behavior would only make things worse. “I’ve got a gun and I know how to use it.”, Jake said.  “If I have to protect my kids I’ll do it without hesitation.”

Previous Post: « Cynthia Nixon: For Me, Being Gay is a Choice
Next Post: Governor’s Introduction of Marriage Equality Bill Imminent in Maryland »