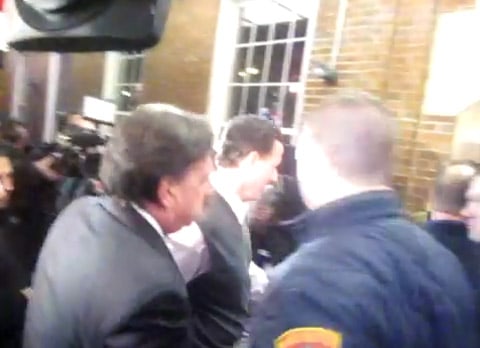 As he was arriving at his final campaign stop in Manchester, New Hampshire last night, Rick Santorum ran a gauntlet of protestors who loudly chanted "bigot" as he entered the venue.

“When he says that you can use the government to justify the overwhelming morality of America — which is not true because an overwhelming majority of people do support gay marriage — well then where does the government interruption stop? Can they come into your house or tell you you can’t cut your sideburns or wear mixed-fabric clothing, which are also commandants that appear side-by-side with the anti-gay comments in Leviticus. So, it’s not founded in logic; it’s not founded in a knowledge of history or a knowledge of American civics.”