Stephanie Fortier and Peter Wohlgemut, 5th grade teachers at West Park School in the Winnipeg-area town of Altona, completed training sessions at the Rainbow Resource Centre in Winnipeg in order to be more sensitive to the needs of LGBT students and families. 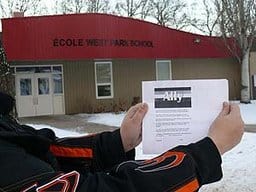 When they completed their course, they were given an "Ally" certificate, which they brought to their classroom and put on display in order to show their support for LGBT students and families and make them more comfortable.

But Christian parents aren't happy about them, QMI Agency reports:

Participants were given the option to display the card, which includes the word “Ally” on a rainbow, along with the words, “As an Ally, I support lesbian, gay, bisexual, transgender, Two-Spirit, intersex, queer, and questioning individuals, families and communities. As an Ally, I will work towards a more aware, affirming, safe and open work environment in both policy and practice.”

Since the cards were posted, the school has had a steady stream of parents asking they be removed. Many only heard about the card this week.

Said one parent: “We have to sign hundreds of petitions to allow religious exercises in school. We should treat this situation in the same way, as it seems to be just as controversial.”

Previous Post: « Madonna in the Studio with M.I.A. and Martin Solveig in MDNA Teaser: VIDEO
Next Post: Gay Berlin Man Missing for Three Weeks Found to Be Victim of Gruesome Murder »