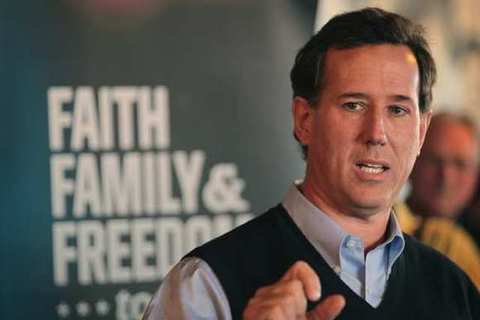 By now we all know that Rick Santorum's riding a campaign high: the former Pennsylvania senator is now third in Iowa polls, one day before that state's caucuses, has gathered up scores of social conservative endorsements and even has Rupert Murdoch in his corner.

While Santorum's long-time opponents on the left have been shining a light his bigoted, backward politics to thwart his presidential campaign, it seems now those on the right are joining in by unveiling contradictions between homophobic politico's rhetoric and his post-Senate work:

From "For All of Santorum's Traditionalism Rhetoric," posted over at the right-wing website RedState:

Universal Health Services, on whose board he sat until he left in June of this year, runs a PRIDE Institute in Minnesota. It’s the “nation’s first and leading provider of mental health service to the gay, lesbian, bisexual and transgendered community.”

Ironically, given Santorum’s strong comments on “homosexual acts,” according to the PRIDE Institute, its exclusive focus on the gay community is necessary because “the society in which we live marginalizes the LGBT community” with “negative covert and overt messages about the gay and lesbian lifestyle.”

In fact, the PRIDE Institute brands the kind of language Santorum used “heterorsexism.”

We shouldn’t however, hold it against Santorum. Often when principle and paycheck come in conflict, paycheck wins. Principle does not always feed a family.

Ouch. Will this revelation tarnish Santorum's social conservative brand or will he be able to swipe it away and go on to win big in New Hampshire, South Carolina and other big ticket states? A high finish in Iowa tomorrow could provide him with some momentum, but it seems unlikely a lawmaker with such a tired, one note platform like Santorum can survive in a political landscape that has changed tremendously since 2008.