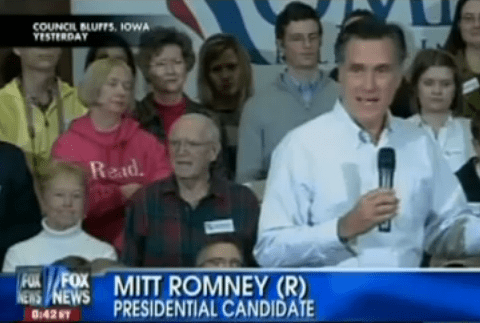 Like Snooki before them, the Kardashian sisters are so ubiquitous that they’re even popping up in political discourse.

Politico reports that Mitt Romney, ever hip and with it, compared what he calls President Obama’s broken political promises to Kim Kardashian and Kris Humphries’ short-lived marriage.

“You know, I’ve been looking at some video clips on YouTube, of President Obama, then candidate Obama, going through Iowa making promises,” he said during a rally in Iowa. “The gap between his promises and his performance is the largest I’ve seen since, well, the Kardashian wedding and the promise of ’til death do us part.”

Obama himself has weighed in on the Kardashians, telling Jay Leno last year he has never seen the show, but still dissuades his daughters from watching their reality shows.

In other Kardashian news, because there’s so much of it, did any of you see the Absolutely Fabulous Christmas special in which Edina Monsoon offers her thoughts on the Kardashians? I’ve reposted the clip below, as well as Romney’s Kardashian remarks, AFTER THE JUMP…