8, Dustin Lance Black's dramatization of the Prop 8 trial which has played a star-studded benefit performance in New Yorker and has another scheduled for Los Angeles on March 3, is going national, the AP reports: 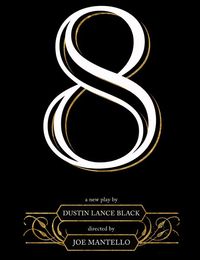 Adam Umhoefer, the foundation's project director, said the glitzy Broadway show and upcoming California counterpart help fund getting the play mounted elsewhere. "Those big tent-pole shows bring attention to the play so that all these other groups across the country can work on their productions," he said.

It will hit marriage equality 'hotspots' across the nation:

Some of the first productions this year will be in New Hampshire, where gay-rights activists are fighting an attempt to repeal the state's gay-marriage law. "8'' will be performed at the University of New Hampshire in Durham, N.H., on Feb. 7 and then three days later at the Palace Theatre in Manchester, N.H.

"In places where there is specific action being taken — where marriage equality is going to become a reality or going to be prohibited legally, or perhaps, in the case of New Hampshire, repealed — that is a focus and where we want to make sure this play is seen and heard," said Umhoefer.

More than 40 readings are now scheduled in more than 17 states.