Rick Santorum won't say if he'd let his kids participate in a boycott of the Girl Scouts over its policy of inclusion for transgender children, Buzzfeed reports: 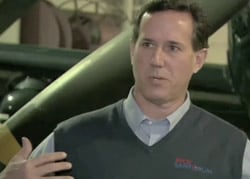 Santorum took a pass when asked his stance on the Girl Scout cookie boycott prompted by the organization's inclusion of a transgender child in Denver — specifically, whether or not he would allow his own children to participate in such a boycott.

He shook his head and said "I don't know anything about that."

The response fits into the former senator's efforts of avoiding talking about the social issues that have at times defined his career, first among them gay rights.

Santorum's also taking a much more negative tone against Mitt Romney, saying that he "deliberately lies".

Santorum tore into former Massachusetts governor Mitt Romney for flip flopping on social issues and “just about every issue that we’ve dealt with in public policy.” He accused Romney of standing behind inaccurate ads run by a pro-Romney Political Action Committee that accuse the former Pennsylvania senator of supporting voting rights for felons.

Santorum also released an attack ad at Romney comparing him to Obama on every issue.

Previous Post: « Hate Groups and Religious Extremists to Picket SPLC Over Their Classification as ‘Hate Groups’
Next Post: Dustin Lance Black’s Prop 8 Play ‘8’ to Be Performed in Dozens of Venues Nationally »