Archbishop Timothy Dolan, who warned of the Communist threat from same-sex marriage in New York during the run-up to its legalization last year, will be among those elevated by Pope Benedict to Cardinal in a ceremony on February 18, City Room reports: 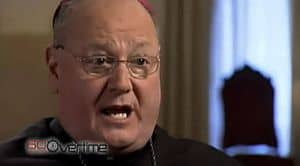 Pope Benedict XVI also named 21 other new cardinals on Friday. Eighteen of the new cardinals are under the age of 80, Reuters reported, and therefore eligible to enter the secret conclave to elect a new pope after Benedict dies. There are 120 cardinals who serve as papal elector.

Vatican Radio carried the official announcement and the names of all those who will be elevated in February.

Archbishop Dolan, who was named to succeed Cardinal Edward M. Egan in February 2009, is set to deliver a mass at the Cathedral of Saint Patrick on Friday morning and would respond to the announcement.

Dolan, who claimed to be deceived by politicians over the marriage equality vote after it happened, also said this:

This is a very violation of what we consider natural law that’s embedded in every man and woman and we’re really worried as Americans that it’s going to be detrimental to the common good.

And called it 'Orwellian social engineering', comparing it to polygamy:

To tamper with that definition, or to engage in some Orwellian social engineering about the nature and purpose of marriage, is perilous to all of us.  If the definition of marriage is continually being altered, could it not in the future be morphed again to include multiple spouses or even family members?

And suggested it was a Communist threat:

Last time I consulted an atlas, it is clear we are living in New York, in the United States of America – not in China or North Korea.  In those countries, government presumes daily to “redefine” rights, relationships, values, and natural law.  There, communiqués from the government can dictate the size of families, who lives and who dies, and what the very definition of “family” and “marriage” means.

He also put it same-sex marriage in the same category as marrying one's mommy.

Apparently it was enough anti-gay hate to get him a big promotion.