As Andrew said she might do in a post yesterday, Washington Governor Christine Gregoire today announced her intention to introduce a bill legalizing same-sex marriage in her state, the Seattle Times reports: 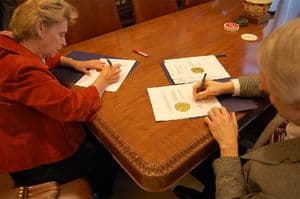 “It’s time, it’s the right thing to do, and I will introduce a bill to do it,” Gregoire said. “I say that as a wife, a mother, a student of the law, and above all as a Washingtonian with a lifelong commitment to equality and freedom. Some say domestic partnerships are the same as marriage. That’s a version of the discriminatory ‘separate but equal’ argument.”

If legislation is approved, Washington would be the seventh state in the nation to legalize gay marriage, after Massachusetts, Connecticut, Iowa, New Hampshire, Vermont, and New York.

“Our gay and lesbian families face the same hurdles as heterosexual families—making ends meet, choosing what school to send their kids to, finding someone to grow old with, standing in front of friends and family and making a lifetime commitment,” Gregoire said. “For all couples, a state marriage license is very important. It gives them the right to enter into a marriage contract in which their legal interests, and those of their children if any, are protected by well-established civil law.”

Today's statement was the first time Gregoire has publicly endorsed marriage equality. The bill will be introduced during the legislative session that starts on Monday.