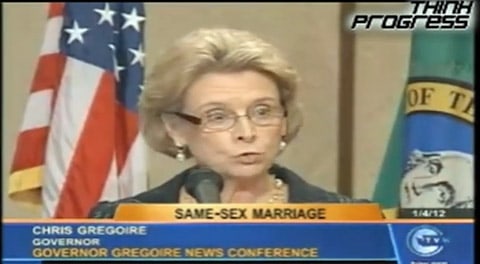 Some argue that the state should deny a marriage license to same-sex couples based on the premise that marriage is for procreation. Do we then deny a license to heterosexual couples who choose not to have children?… To those who can’t have children or those who adopt?…  To those who have children through in-vitro fertilization?  Some argue that same-sex marriage weakens the institution of marriage. Is this a role of the state? If so, it has failed miserably with a divorce rate among heterosexual couples now at about 50 percent.

Some argue that the state must deny a marriage license based on religious beliefs.  With a marriage license, couples marry in civil or religious ceremonies.  In issuing the license, the state should not involve itself in an applicant’s religion.  The responsibility of the state is to license only. The right of a church is to decide whom to marry, and the state will honor the religious freedom of all faiths.

Gregoire also described her "journey" in endorsing marriage equality: "Let me just tell you I feel so much better today than I have for the last seven years.