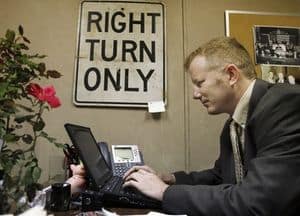 Most people realize that AIDS came from the homosexual community. It was one guy screwing a monkey, if I recall correctly, and then having sex with men. It was an airline pilot, if I recall.

As Andy reported Friday, Campfield went on to assert that heterosexuals are virtually immune to HIV/AIDS.

I took a look at what appears to be Sen. Campfield's blog — the link to which was helpfully supplied supplied by a Towleroad reader last week — and it seems Campfield has actually read And The Band Played On. Campfield wrote:

The research on sex with a monkey being the first transmitter of AIDS has not been proven nor firmly dis proven. It is one of about 5 theories I was able to find on the source of AIDS. No credible source said any one was clearly definitive one way or the other.

It was first published I think in a book which documents the history of the AIDS epidemic is entitled "And the Band Played On." The author of "And the Band Played on" was appalled by the unsanitary and degrading behavior of homosexuals. He died of AIDS a year after his book was published. The homosexual pilot comment was first printed in the American Journal of medicine article about "Patient 0". His name was Gaeton Dugas. While possibly not the first person with AIDS he is still widely considered the person who widely transmitted the modern outbreak of the disease.

This is a remarkable document, and not only because it demonstrates that at least one American legislator is unable to spell "disproven." (I don't think it's a fluke, for Sen. Campfield demonstrates similar difficulties with prefixes elsewhere on his blog.) Mostly it's remarkable for demonstrating a terrifying absence of reading comprehension on the part of a man who makes laws regulating the behaviors of people he reads about. As even the most casual AIDS scholars surely know, Gaetan Dugas was no pilot, and it's never been suggested that he had sex with monkeys. (And some would say that Randy Shilts was anything but "appalled" at the excesses of gay life in the 1970s, but that's another matter.) And it's not just "possible" that Dugas wasn't the first person with AIDS. Unless the tweenaged Gaetan Dugas spent the mid-1960s trafficking diseases between Africa and Missouri, it's a fact.

No one can know everything, and nothing can be known by everybody. But Sen. Campfield is the author of Tennessee's "Don't Say Gay" bill — which he defends, in the very same blog post, by stating that:

– We are falling behind the rest of the world in math, science, and English amongst other things. Tennessee ranks about 46th in most areas. Social engineering is just one less issue teachers should have to worry about teaching as part of their curricula.

— and so it shouldn't be too much to hope he'd attempt to understand the populations he means to rule. But he won't. It's a testament to Sen. Campfield's incuriousness that he doesn't bother to wonder why, given his own standards, prepubescent children should know about "natural reproduction" but not plain-old sex; or what positions vis a vis sexuality are taken by those countries which have eclipsed the United States in "math, science, and English amongst other things."

Previous Post: « NEWS: Gangs, Gingrich, And A Ghastly Death At The Hands Of A Deranged New Ager
Next Post: WATCH: Christina Aguilera Sings “At Last” At Etta James’s Funeral »