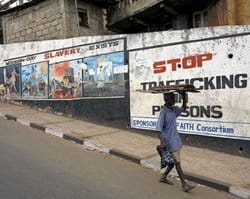 There's some troubling news out of Kenya. The LGBT magazine Identity reports that unemployed men are being lured to Gulf states with the promise of jobs but are in actuality being recruited for a booming sex trafficking industry there.

The report alleges that gay and bisexual men are lured from university campuses – particularly from Kenyatta University – with promises of high-paying jobs and then transported to labor as sex workers for men in the United Arab Emirates, Qatar and Saudi Arabia.

According to the magazine, due to Kenya’s soaring unemployment rate, the men are easily fooled into this trap.
…

Qatar specifically, has no laws against human trafficking, which has made cracking down on the practice nearly impossible.

One man, a Canadian named Mark who lives in the Emirates, said he's seen the impact of such trades, and points the finger squarely at the region's homophobic cultures.

"We have seen a lot of the elite and super wealthy want to be gay, but that would go against their traditions, so instead they often marry and then hire or do this kind of thing, to have their real desires met. It is a problem of society not opening up to the gay lifestyle and forcing it to the background," he said.