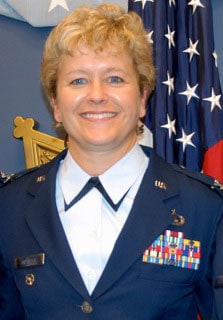 She currently lives in McLean, Virginia with her partner of over a decade, Kathy Knopf.  In December, Ms. Knopf attended Col. Wallace’s promotion ceremony and participated in the “pinning on” of Col. Wallace’s rank, marking the first such event reported following the repeal of "Don't Ask, Don't Tell.”  Col. Wallace is currently training to deploy to Afghanistan in the Spring 2012 through the Afghanistan-Pakistan Hands program.

Lisa Keen spoke with Wallace: “I could not be more honored or proud,” said Wallace, Tuesday morning. “I’m representing thousands and thousands who have served or are serving…. But it’s truly not about us. It’s about all the gays and lesbians who have served, and those who served and we’re not as fortunate as I to have full careers, and those who will serve in the future. And it is about our families and partners.”

"This is a clear victory in the fight to achieve full equality for service members.  In his 2010 State of the Union, President Obama committed to repealing 'Don't Ask, Don't Tell,' and indeed, it would not have been possible without his determination to do so.  Even as we celebrate this milestone tonight, let us not forget that our work is far from done.  While gay and lesbian service members may now serve openly if they choose, they are still not serving equally.  They are without the same protections from harassment and discrimination that are afforded others, and legally married gay and lesbian service members do not receive the same recognition, support, and benefits for their families as their straight married counterparts.  We must keep fighting until the mission is complete."

And Lorelei Kilker, an analytical chemist for an environmental laboratory, will also be the First Lady's guest.

In October of 2011, Ms. Kilker was one of a class of women who benefitted from the Equal Employment Opportunity Commission’s (EEOC) investigation of alleged systematic sex discrimination at her former employer that resulted in the award of back wages and significant remedial relief, arrangements that were achieved through a cooperative process between the employer and EEOC.  Since the creation of the President’s Equal Pay Task Force in January 2010, EEOC obtained almost $50 million in monetary relief through administrative enforcement for victims of sex-based wage discrimination, obtained changes to workplace practices that benefit over one quarter of a million workers, and filed five cases including sex-based wage discrimination claims.

Kilker lives in Brighton, Colorado with her domestic partner and their two children.

Chris Geidner has more on Kilker and how her presence at the State of the Union highlights LGBT inequality: 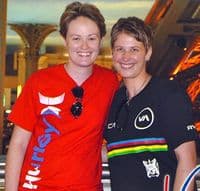 Kilker and her partner, Sara Nelson, are traveling to D.C. from Colorado today, and Kilker's case, though being touted as a sign of the administration's success, is a stark sign of current limitations of the law for LGBT employees in the workplace – limitations that advocates believe President Obama could take a significant swipe at with the stroke of a pen.

For the person who served as the lead counsel in the House of Representatives working on the Employment Non-Discrimination Act from 2007 to 2010, however, Almeida also sees the difficulties an employee like Kilker faces under the law in many states today.

If she had been discriminated against because she is a lesbian instead of because of her sex, Almeida notes, ''She would have been turned away by the EEOC because they would not have had the legal authority to take her case.''