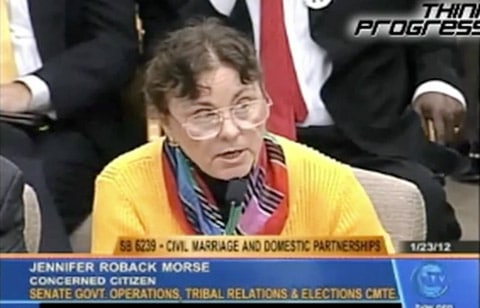 Yesterday, we learned the fantastic news that following Washington state's marriage equality hearing, a state Senator had changed her mind and provided the 25th vote needed to pass the measure.

Perhaps it was the disgusting bigotry of Jennifer Roback Morse of NOM's Ruth Institute that changed her mind.

Listen to Roback Morse's condescending bigoted diatribe (which is likely, and thankfully moot given yesterday's news), AFTER THE JUMP… 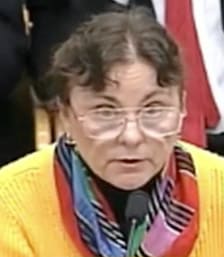 Roback Morse slammed gay couples for having the gall to request a room together at a Bed & Breakfast:

"And the pettiness of some of the complaints brought by same-sex couples is simply staggering. Christian Bed & Breakfast owners have been sued for not allowing unmarried couples to stay in double rooms. They would have gladly rented them separate rooms, but that was not good enough."

She defended wedding photographers who refuse to work for gays:

"Same-sex couples have brought legal complaints against wedding photographers — as if there were a constitutional right to have your picture taken by the person of your choice! All in the name of civil rights."

She pushed the "gay is not the new Black" meme:

Let me remind you, that a vast majority of African-Americans completely reject same-sex marriage. They're deeply offended by the hijacking of the moral authority of the civil rights movement.

And she insulted gay families, painting gays as inadequate criminals, stealing a child's parent (no doubt Zach Wahls would have something to say about that):

When slavery was abolished, all slaves became free men and women. When women obtained the right to vote, the discrimination ended with the very next election. But for the children of same-sex marriage the situation will be different. When we come to our senses 30 years from now and realize that we have perpetrated a grotesque injustice, not a single child born motherless or fatherless within a same-sex marriage will get his missing parent back.

Listen to Roback Morse's condescending bigoted diatribe (which is likely, and thankfully moot given yesterday's news), AFTER THE JUMP…

Think Progress LGBT has three more clips of testimony, from Pastor Hutcherson and other witnesses who likened gay relationships to NAMBLA, HERE.