YOUR FEATURE PRESENTATION
If you've ever wanted to see Ewan McGregor or Channing Tatum punched in the face repeatedly, HAYWIRE is your movie. At one time or another, the actors take quite a believable pummelling from rogue CIA agent Mallory (Gina Carano) in Steven Soderbergh's experimental action picture. Soderbergh first spotted his new muse, a real life mixed martial arts champ, while channel-surfing and was so transfixed he ended up building a feature around her. 'Why can't there be a female James Bond?' went his reasoning. He must have meant it in a loose sense for Mallory is no Bond. She's not super verbal, isn't at all comfortable at elegant black tie events, and has no discernible signature catchphrase. She orders no martinis, neither shaken nor stirred.

Carano's lack of acting experience shows when she's not fighting but thankfully that isn't often. Soderbergh, ever a resourceful director, keeps forcing her to dodge bullets, fists, and sharp objects. His fascination with Carano's athleticism pays off in the action sequences but the movie is curiously flat story-wise. We hop around the Globe with Mallory on assignment or for escape but, like her, we're always behind the story curve. For all we can figure they're making up the story as they go along as Mallory meets each new shifty coworker or employer. For what it's worth that's one piece of man candy after another: Ewan McGregor, Channing Tatum, Michael Fassbender, Matthieu Kassovitz, Antonio Banderas. (Perhaps Soderbergh was already thinking about his follow up, the Channing Tatum male stripper movie Magic Mike?)

More Haywire (Plus: Carol Channing and Jamie Bell) AFTER THE JUMP… 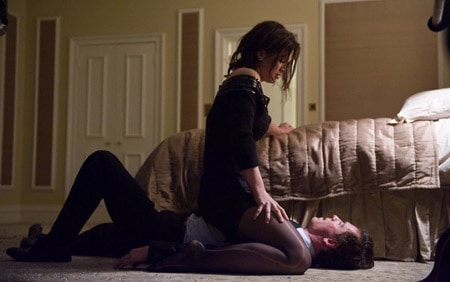 Soderbergh has always been a restless filmmaker, experimenting with genre and form, and Haywire seems to exist principally as areaction against the current state of action filmmaking. The subversions produce wildly uneven results. He completely rejects the predominant color palette of action movies (blue/gray) but chooses… yellow? My friend recently dubbed the movie "Jaundicewire" and he didn't mean it affectionately. Soderbergh's experiments within fight scenes mostly pay off though, especially the decision to hold each shot as long as possible without a cut. This allows you to actually see the fighting and believe in each blow; Fassbender sure can take a beating!

All of the experimenting with form though eventually feels like the movie's whole reason for existence. It's an experiment rather than an organic story just waiting to be told. Soderbergh is quite a mixologist — can't wait for Magic Mike! He shakes the action genre up but Haywire is rarely stirring. 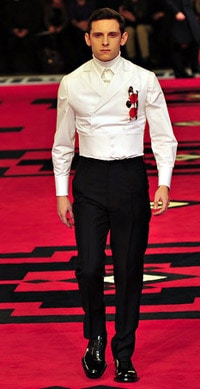 RASPBERRIES!!!!!!! Carol Channing turns 91 later this month so make sure to see CAROL CHANNING: LARGER THAN LIFE the first chance you get as celebration. The inimitable star recently lost her husband and their remarkable love story is but one fascinating part of this new comprehensive documentary by Dori Bernstein who is an expert on Channing, naturally. They're staggering the release date a bit due to Channing's recent loss (and other factors) but Towleroad readers in Los Angeles can now see the movie. It opens in NYC in early February. I saw the movie at the Tribeca Film Festival last year and Carol Channing was in attendance. During the Q&A she shared many of the same anecdotes we'd just seen in the documentary but with Channing, repetition proves surprisingly endearing.

Believe it or not the Golden Globes red carpet did not contain every star on the planet. Over in Milan, Prada managed to snag several more stars who weren't Globe nominated: Adrien Brody,Gary Oldman, Willem Dafoe, and Jamie Bell. They all walked the runway with professional male models. I still haven't forgiven Steven Spielberg for casting Jamie Bell in a leading role (The Adventures of Tintin) and then burying his face in CGI. Noooooooo. Never hide the Bell! He's much too pretty to hide with performance capture; some faces are meant to be shared with the world.

AWARDS MANIA! The Help just got another vote of confidence, this time from the NAACP who gave it several nominations. The lesbian drama Pariah (which is excellent) followed that Meryl Streep Golden Globe shout out with several nominations, as well. Actual Oscar ominations are out next tuesday morning but a few categories are already narrowed down like visual effects, makeup (I'm rooting for Meryl Streep's transformation into The Iron Lady even though I'm not crazy about the movie) and foreign film for which there are nine finalists including my #1 picture of the year the Iranian drama A Separation.

Are you excited for Oscar season?