Earlier this week, Mitt Romney's spokesperson disavowed a 2002 flyer allegedly distributed during Boston's Gay Pride festivities, saying the flyer was not created by the campaign during Romney's run for governor. 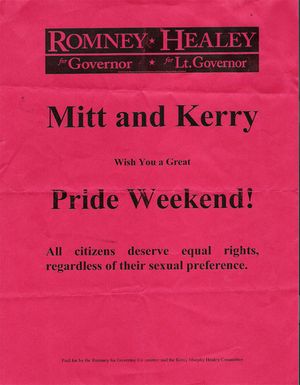 "…a former Romney campaign volunteer who is now a fiscal policy scholar at a conservative think tank told BuzzFeed the flyer calling for 'equal rights' were in fact campaign literature. The Manhattan Institute's Josh Barro told BuzzFeed he was a college intern for Romney's campaign at the wage of $150 per month and the task of answering mail to Romney's running mate, Kerry Healey."

Meanwhile, the Obama campaign is hitting Romney for this flip-flop in an email from its LGBT coordinator Jamie Citron:

The Mitt Romney who ran for U.S. Senate in 1994 promised voters in Massachusetts that he'd be a stronger advocate for LGBT rights than Senator Kennedy.

And in 2002, while running for governor of Massachusetts, Romney's campaign passed out fliers for Pride Weekend, saying "All citizens deserve equal rights regardless of their sexual preference." Yesterday afternoon, Mitt Romney's current campaign actually disavowed that 2002 flier.

You're probably wondering a few things. First, just exactly which part of that flier doesn't he agree with? And second, what could have possibly changed between yesterday morning (when Romney said he felt gays and lesbians deserved "full rights") and yesterday afternoon? Maybe he thinks that line won't play as well in the upcoming South Carolina primary?

It's election season again, and the only Mitt we really know is the one who will say whatever it takes to win. If he is the Republican nominee, we can expect him to suddenly try and be best friends with LGBT voters again. That's why we're sending him the message that it doesn't work like that — and that we won't let him get away with it.

Say you'll help hold Mitt accountable before he has a chance to pander yet again:

Mitt's going to try to be whoever he thinks he needs to be to get elected — it's our job to make sure those tactics come at a cost.

“After Mitt Romney claimed he’d be a stronger advocate for gay rights than Senator Kennedy when he was running for office in Massachusetts, and one day after saying that gays should have ‘full rights,’ Romney’s campaign today disavowed a flier that simply said ‘all citizens deserve equal rights, regardless of their sexual preference,” LaBolt said. “What on that flier does Mitt Romney disagree with?  Does he not believe all Americans should have equal rights? Who is he trying to pander to now? This is why Americans will have trouble trusting Mitt Romney — he doesn’t keep his word.”