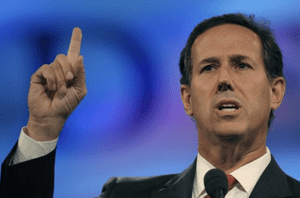 The last three days have seen a veritable flood of Santorum-related news, as one after another of Santorum's New Hampshire events — at which the surging candidate hopes to discuss the state of the American economy, and little else — is hijacked by questions about Mr. Santorum's views on the LGBT community. Yesterday, for the third time in 48 hours, Mr. Santorum insulted LGBT families, this time by insisting that it's better for a child to have a father in prison than two mothers and no father at all.

He cited research by a lone "anti-poverty" expert to justify this claim. More galling, perhaps, is what he claimed next. From Tribune Co:

Allowing gays to marry and raise children, Santorum added, amounts to "robbing children of something they need, they deserve, they have right to. You may rationalize that that isn't true, but in your own life and in your own heart, you know it's true."

"In your own life and in our own heart" — in other words, Rick Santorum knows what you think and feel better than you do.