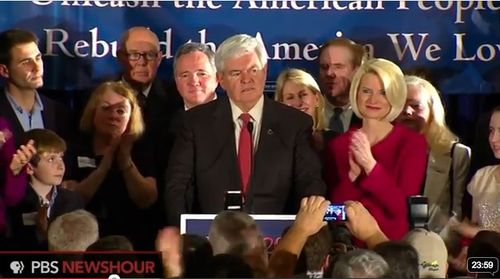 So many people who are so concerned about jobs, about medical costs, about the everyday parts of life, who feel that the elites in Washington and New York have no understanding, no concern, no reliability, and in fact do not represent them at all.

… In the two debates that we had here, in Myrtle Beach and then in Charleston, where people reacted so strongly to the news media — I think it was something very fundamental that I wish the powers that be and the news media would take seriously. The American people feel that they have elites who have been trying for a half century to force us to quit being American and become some kind of other system.

This is red meat — the kind which, in steak houses, is said to have been aged to perfection. For a few moments, he seemed on the verge of singing the praises of The Great, Silent Majority and throwing up the double-V's-for-victory. Watch AFTER THE JUMP …

Previous Post: « A Fawn Welcome to Your Week: VIDEO
Next Post: GLAAD Lays Off Almost A Quarter Of Employees (UPDATED) »